Every Creation Myth Has Its Devil: The Social Network

In To the movies

We lived in farms, then we lived in cities, and now we’re gonna live on the internet!
– Sean Parker in The Social Network 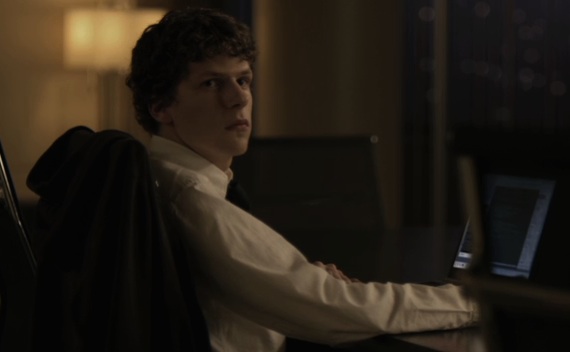 More than a decade has passed since director David Fincher polarized audiences and critics with Fight Club. Some saw the movie as a brilliant satire summing up the zeitgeist of the late nineties. Others saw it as a cold and cynical excercise in nihilism.

In the time that has passed Fincher has established himself as a filmmaker with a unique vision. We quickly forgave him the clumsy Panic Room, when he returned to give us the excellent Zodiac, later followed by a warm and humanistic Benjamin Button.

This year’s Fincher film is The Social Network, a story about the founding of Facebook. And the reason I started by mentioning Fight Club is that I see this movie as somewhat related. Not in form and genre, but in holding a mirror up to our time and giving the present a good kick in the nuts.

A film about Facebook? At first you might think it’s a lame idea. But Fincher and screenwriter Aaron Sorkin saw that this story needed to be told. 500 million people are on Facebook. The phenomena clearly needs to be studied and become the subject of art.

The story follows Mark Zuckerberg, the creator of Facebook, through the few years that have passed since the idea was born. Fincher sets up a pace and rhythm that leads the viewer effortlessly along, from dorm rooms to bars to glass-walled law-firm offices. His cast deliver focused and compelling characters, never letting anyone become pure hero or villain. Fincher shoots digitally, this time with a new RED camera, and the HD images are immaculate. The color palette is easily recognizable, as in Zodiac and Benjamin Button, with warm, yellowish highlights and low key lighting that never loses detail even in the shadows.

Besides being a technical masterpiece, the film also delivers on subject and theme. These days the news are dominated by Wikileaks, and, here in Norway, the controversial Data Retention Directive. Information control no longer exists. What does that do to our right to privacy? How can we legislate bits and bytes? Can societies handle these enormous overnight changes?

The Social Network is a piece of film art that intelligently comments on all this. Not in an overt and preachy way. But by telling a focused and fast paced story about a phenomenon that went from non-existing to universal at lightspeed. Computer geeks can change the world from their bedrooms, witness both Zuckerberg and Wikileaks’ Julian Assange.

It’s still just 2010, but I’ll say it anyway: when we put together our lists of the best movies of the decade in 2019, The Social Network is going to rank very high. By then we may already have forgotten Facebook and moved on to other social media. But the movie will remain – excellent, provoking, entertaining as hell.

How to juggle several screenwriting projects